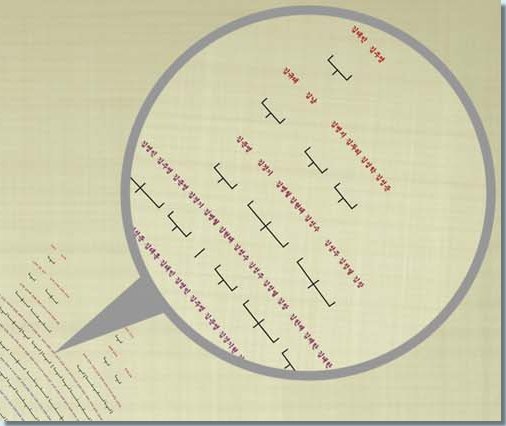 The family tree is a unique theme of study in information visualization. Korean family trees are collections of books that focus on the blood relation on the father’s side, records of the family status, and private records on ancestors’ behaviors, achievements, and epitaphs, a history book for the clan. Like traditional Chinese family trees, Korean family trees are not simple charts like those seen ordinarily in the West. The names of hundreds of thousands (sometimes several million) of people are recorded in the family trees, so in addition to their original purpose of promotion of family bonds and respect for ancestors, they are used as precious materials in examining history over several hundred years.

This artwork presents the visual image of a family tree. It enables an intuitive glance at a mammoth dataset and presents a unique visual experience of the history of several hundred years during which the progenitor was multiplied to hundreds of thousands of descendants, who were again split into several branches. The innumerable names that I encountered while visualizing my origins gave me an opportunity to reflect on my existence. The people whose names do not appear in this family tree (for example, SIGGRAPH 2007 attendees) have similar family-tree patterns in their ancestries. I believe they will live more serious lives if they recognize this fact.

This artwork is one successful result of the various attempts to enable intuitive understanding of mammoth datasets. Though the Korean family tree is a huge dataset, visualizing it with a remarkably low degree of complexity is possible since only the blood relationship on the father’s side was recorded, and marriage between people who share the same ancestor (those who are listed in the same family tree book) as prohibited by tradition.