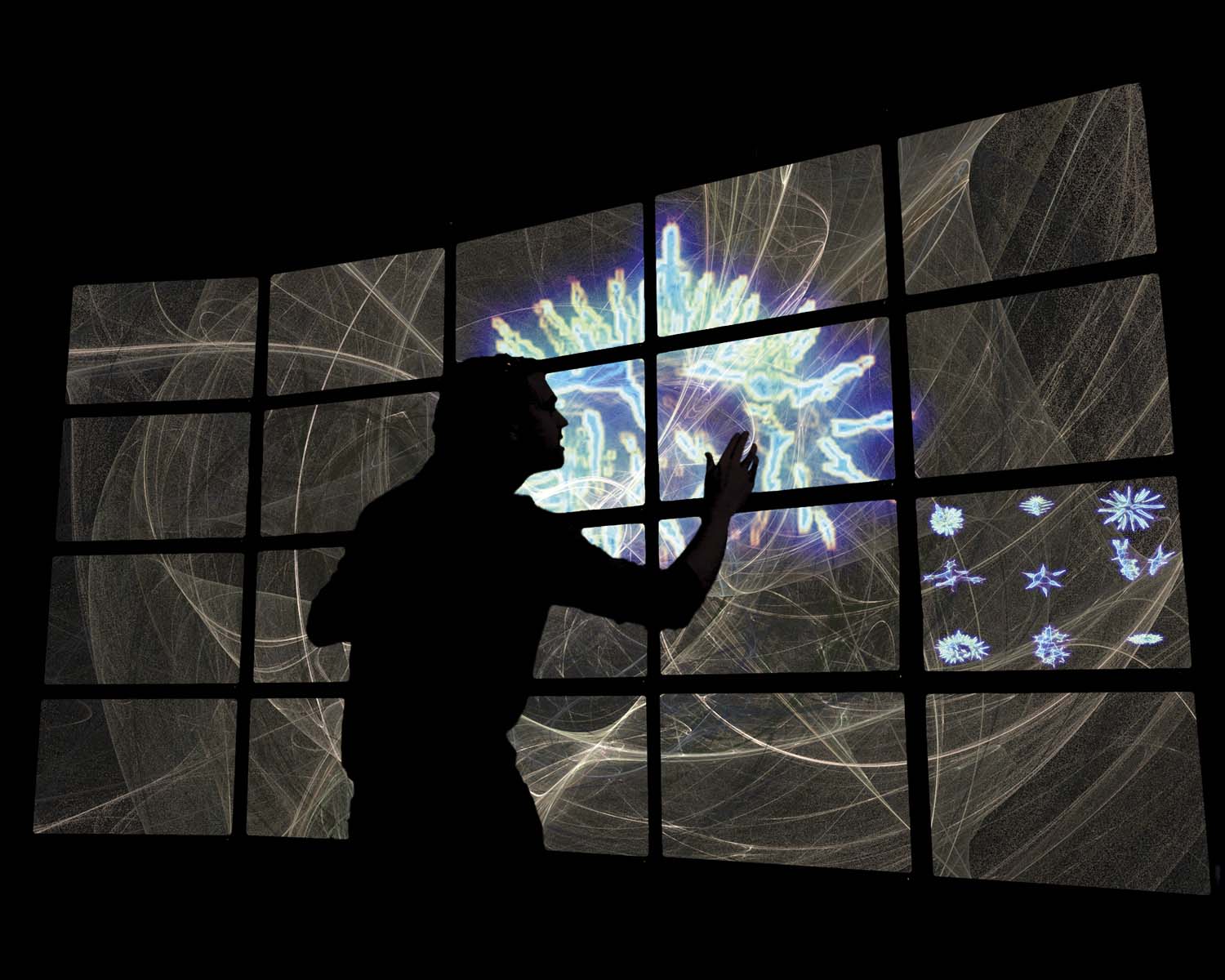 ATLAS in silico bridges art, science and perception to reflect upon humanity's long-standing quest for an understanding of the nature, origins, and unity of life. It presents an immersive and interactive 3D world in which participants explore luminous and colorful 3D graphics and a unique sonic micro world composed of genetic sequences from the Global Ocean Survey. The Global Ocean Survey (GOS) is a recent pioneering voyage of discovery circumnavigating the Earth’s oceans. It gives us a new picture of life on Earth, by assessing microbial diversity in the world’s oceans, with "potentially far-reaching implications for biological energy production, bioremediation, and for creating solutions for management of greenhouse gas levels in our biosphere." [Source: CAMERA http://camera.calit2.net/about-camera/GOS.php]

In parallel to this oceanic journey that was inspired by 19th Century global circumnavigations of the H.M.S Challenger and H.M.S. Beagle, the aesthetics of this artwork are grounded in history and in our future. They embody the visual culture and relationship that existed between art and science in the 19th Century, and the renewal of this relationship in the 21st Century via emerging digital technologies. ATLAS in silico creates a visceral, sensate experience of the abstraction of nature in to vast databases like the GOS — a practice that connects expeditionary science of the 19th Century with 21st Century expeditions like the GOS. Participants encounter a dream-like, highly abstract, and data-driven virtual world that combines the aesthetics of fine-lined copper engraving, lithography and grid-like layouts of 19th Century scientific representation with 21st Century digital aesthetics including 3D wireframes and particle systems. Exploring this luminous, colorful and dynamic 3D world allows participants to reveal relationships within a mixture of biological, social and environmental data that spans from the molecular (nano scale of protein molecules) to the global (social and environmental).

ATLAS in silico embodies the concept of the "data_made" – an aesthetic modality to transform data from its raw and potentially meaningless state, to the state of “art_object” in order to evoke intuitive understanding. It offers an intimate aesthetic encounter with the Global Ocean Survey, and its associated metadata, within an immersive visual atlas. Eliciting an aesthetically impelled metagenomics viewpoint in order to explore alternative modalities for representing nature, it calls out the relationship between data and understanding, and between data about life and the life that it describes.